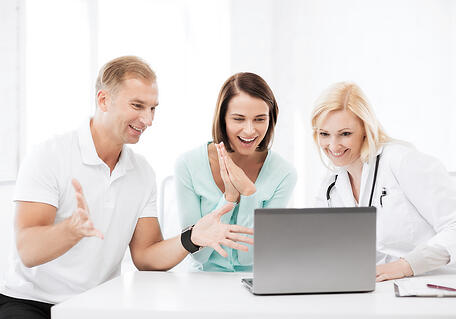 and hospitals, leaving many specialists struggling with systems that simply weren’t designed for their needs. That, according to a 2014 study published in the Journal for Healthcare Quality, is one reason that obstetrician / gynecologist practices have lagged behind in adopting EHRs. In short, the researchers noted, many existing systems don’t address the unique needs of ob-gyns, including the fact that they focus on both the mother and the child; practice in the office and in hospitals; and have practices that are medically and surgically based.

That’s a shame. Because, as this and other studies find, the right EHR can have significant benefits for ob-gyns.

In a recent Healthcare Quality study, researchers analyzed surveys assessing 559 ob-gyns’ use of EHRs and satisfaction with the systems. They found that just 56 percent of the physicians used an EHR, although 16 percent said they planned to implement one in the next year. About 63 percent of physicians using the EHR were satisfied with their system.

Other studies find improved adherence to cervical cancer screening in ob-gyns who use EHRs, as well as improved documentation of shoulder dystocia deliveries and the delivery of prenatal care – all of which are important not only for quality of care, but for reducing the potential for malpractice claims.[1],[2],[3]

In fact, one large ob-gyn network found that implementing a real-time, decision support-enabled Ob/Gyn EHR led to a 50 percent drop in malpractice claims.[4]

The lesson from these studies is clear: a well-designed EHR system can significantly improve efficiency and effectiveness in an ob-gyn practice – resulting in improved financial outcomes and quality of care.

Who Benefits From Implementation of Electronic Health Records? What are these Benefits? The word is out -- ambulatory practices continue to reap the...