When Can Providers Use Modifier 25? 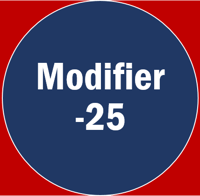 Modifier 25 is frequently used in the wrong context -- sometimes mistakenly but more often as a result of purposeful attempts to increase a practice's level of reimbursements. The modifier is clearly defined as an identifiable evaluation and management (E/M) service performed by the same physician and on the same day as the initial procedure. However, many attempts have been made to stretch this definition in recent years, with some practices trying to use modifier 25 for situations in which the E/M service was performed by someone other than the physician responsible for the procedure in question.

The consequences for misuse of modifier 25 can be great, especially now that the Office of the Inspector General has increased scrutiny related to the modifier's use and frequent abuse. Avoiding abuse of modifier 25 does not have to be difficult; it simply takes a thorough understanding of the situations in which the modifier is appropriate. Use the following guidelines to ensure full compliance:

Smaller procedures often involve quick examinations of the patient, but these are generally included as a built-in part of the procedure. However, in certain circumstances, the patient may require a separate and more thorough examination. If modifier 25 is used for a separate examination, this exam must be considered a medical necessity, without which safe execution of the procedure would be impossible. For insurance purposes, this medical necessity may be identified by the phrase "the patient's condition required."

Sometimes, an evaluation will take place on its own accord, with no plans of a procedure after the evaluation is complete. If, during the course of the evaluation, the physician determines that a further procedure is required, this should not be considered a modifier 25. In this circumstance, modifier 57 would be more appropriate. Modifier 25 is only used if the procedure has already been scheduled, along with a separate examination.

Modifier 25 is generally not used to designate evaluations taking place before routine, regularly scheduled procedures. It is more likely to be used on one-time procedures that are not viewed as part of a medical routine for the patient in question.

Visits by the same physician on the same day as a minor surgery or endoscopy are included in the payment for the procedure, unless a significant, separately identifiable service is also performed.

For example, a visit on the same day could be properly billed with the 25 modifier in addition to billing for suturing a scalp wound if a full neurological examination was made for a patient with head trauma.

Billing for a visit would not be appropriate if the physician only identified the need for sutures and confirmed allergy and immunization status. In the circumstance when the decision to perform a minor procedure is typically done immediately before the service, (e.g., whether or not sutures are needed to close a wound, whether or not to remove a mole or wart, etc.) it is considered a routine preoperative service and a visit or consultation should not be reported in addition to the procedure.