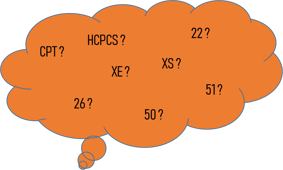 What are CPT Modifiers?

Code modifiers are codes that supply further information about a CPT or HCPCS code, such as if the procedure was more complicated than normal or performed under unusual circumstances.

All medical coding boils down to the same concept:  a standardized representation of medical diagnosis (ICD-10 codes) and performed procedures (CPT and HCPCS codes) that in turn create a record of a medical visit for billing purposes.

Codes are determined strictly by the documentation that is held in the medical record.  There is an old medical billing adage that states, “if it is not documented, it is not done.”  Therefore, when coding, it is imperative that the only codes that are contained in a claim are codes that have evidence for usage in the medical record.  It is never acceptable to infer or assume that a procedure has been done or a diagnosis made.  Billing accuracy often increases when EMR software is integrated with medical billing software.  Learn more about the advantages of having your EMR integrate or interface with your practice management system here.

Let us examine CPT and HCPCS coding and the modifiers that help create the ‘larger picture’ for reimbursement purposes.

What is a CPT Code?

CPT stands for Current Procedural Terminology, and it is published and owned by the American Medical Association (AMA). CPT codes are five-digit numbers and primarily used in office and outpatient settings.

What is a CPT Code Modifier?

CPT code modifiers are two-digit codes linked to the CPT that provide a further description of the evaluation and management (E/M) and/or procedures performed during the office visit.

What is a HCPCS code?

HCPCS codes are developed by CMS (Centers for Medicare and Medicaid Services).  Commonly referred to as ‘hick-picks,” they are comprised of a letter followed by 4 digits.  Although CPT codes are primarily used with Medicare, Medicaid, and other private payors, there are instances where the HCPCS code is preferred.

HCPCs are commonly used for transportation services, outpatient prospective payment system services, durable medical equipment, orthotic procedures and devices, and procedures and services that are under review before they are included in the CPT codebook.  Learn more about HCPCS here.

What is a HCPCS Modifier?

HCPCS modifiers are used by Medicare and other commercial payors, depending on the circumstances.  They may be two alpha digits, two alphanumeric characters, or a single alpha digit.

How do you know which kind of code to use: CPT or HCPCS?

Generally, CPTs are acceptable for both private and government payors.  However, it is important to note that each payor has its own guidelines about which code to use.  It is not unusual for the same procedure to require a CPT code for one payor and a HCPCS for another.   Therefore, it is advisable to check the payor’s website, providers’ manual, or call the payor’s provider relations department if you have questions about the acceptable code; this is especially important if the code involves medications, vaccinations or medical equipment.  It is also useful to periodically audit your claims to confirm you are  using the appropriate codes.  Click here for best practices to employ when auditing your billing.

The correct modifier to use is determined by payor preference.  There can be instances where a CPT code is further defined by a HCPCS modifier, for example, to describe the side of the body the procedure is performed on such as left (modifier -LT) or right (modifier -RT).  And of course, HCPCS modifiers can be used to describe HCPCS codes as well.

ICD-10 Coding and the Use of Modifiers

Before assigning a modifier to establish where a procedure took place, it is essential to check if an ICD-10 diagnosis code is able to provide the information.  For example, pain in the right lower leg would be M79.661 while pain in the lower left leg would be M79.662.  Diagnosis coding always requires the most specific code possible.  It may not be necessary to include a modifier if the description is contained in the ICD-10 coding.  Like all billing scenarios, the use of a modifier can vary in reference to ICD-10 coding, so if you have any questions, it is best to check with the payor.

Modifier 22 is used to describe an increased workload associated with a procedure.  This modifier should be used in exceptional cases only, and payors will frequently require documentation of the service before they make payment.  The 22 modifier can be used during surgeries or other procedures when there is increased technical difficulty or because of the severity of the patient’s condition.  For example, 22 can be used when there is unusual or excessive hemorrhaging during a procedure.

Modifier 25 is used when there is a significant, separately identifiable evaluation and management   (E/M) service done by the same physician on the same day of service; and it can only be used with an E/M code.  The correct use of a 25 modifier is usually indicated when there is two distinct diagnoses made during the visit.  However, under the right circumstances, only one diagnosis may be required.  For more detailed information, visit our fact sheet about using this modifier.

Modifier 26 indicates the professional service of a CPT that has a global (professional and technical) definition.  For example, an orthopedist receives an x-ray and determines a diagnosis from the x-ray.  The correct code CPT would be 73070-26 because the x-ray was taken elsewhere.  The CPT 73070 without the modifier would indicate that both the x-ray and its interpretation were done by the same provider group.

Modifier 50 indicates that a procedure took place on both sides of the body.  Before applying this modifier, it is important to check the definition of the CPT to confirm bilaterally is not already mentioned in the code definition.

Modifier52 indicates that the physician has elected to discontinue a service or procedure.  This modifier can be attached to an E/M service if an examination needs to be discontinued due to a situation such as patient non-cooperation.  It can also be attached to a procedure CPT if it is not completed.

Modifier 59 is useful for situations where two CPT codes that are not normally reported together on the same day of service by the same provider are necessary because of circumstances.  Documentation must support that each CPT procedure was required due to an entirely separate visit on the same day, a different site or organ system was involved, or a separate injury.  This modifier should not be used with E/M services and is only applicable when no other modifier adequately describes the situation.  For examples of how to correctly use this modifier, visit the CMS website.

CPT modifier 25 can only be used for E/M CPTs, and under certain circumstances modifier 52 can be used as well.  The majority of modifiers cannot be used with E/M coding, so it is critical to check the definition of a modifier before assigning it to a code.

For the most, HCPCS Medicare modifiers further define where the procedure happened in the body.  Commonly used modifiers are RT (right side) and LT (left side).  There are letter categories, such as the E sequence (ex. E1 upper left, eyelid) and F sequence (ex. F5 right hand, thumb) that create a more accurate anatomical pointer to indicate specifically where the procedure happened.  Four HCPCS Medicare modifiers are commonly used to define the 59 modifier further.  They are:

HCPCS modifiers are used much less frequently than their CPT counterparts but are equally as important when creating a line item that will be accepted by payors.

Impact of Modifiers on Reimbursement

Using modifiers correctly can impact reimbursement significantly.  When reviewing payor fee schedules, make sure that there is a standard reimbursement formula for modifiers such as 22.  For example, if modifier 22 is used, the provider would receive 110% of the standard CPT fee.

As with modifier 22, the reimbursement formula for using modifier 50 should be defined in your payer contract.  Since using the modifier indicates that the same procedure was done twice, most contracts pay out approximately 150% of the fee schedule.

The importance of listing CPTs in order of reimbursement value when using the 51 modifier cannot be understated.  Reimbursement is paid at 100% allowable for the first procedure and is then reduced by 50% for each subsequent procedure unless the CPTs are exempt from multiple procedure logic.  For further direction on this topic, click here.

How is Correct Medical Coding Determined?  The Need for Documentation

Almost every conceivable procedure performed in an office or hospital has a CPT or HCPCS code.  With literally thousands to choose from, attention to detail by the medical provider documenting the visit is essential, as it determines the correct codes to use.

For example, when shaving epidermal and dermal lesions, the diameter of the lesion needs to be noted.  If there is a single lesion removed which is .5 cm or less, the correct CPT code is 11300.  However, if the lesion is .6 to 1.0 centimeters in diameter, the correct code is 11301.  There could be a difference in reimbursement between codes 11300 and 11301, so it is important to make the size distinction in the visit notes.

With the advent of MIPS reporting, it may also be necessary to document what procedures have been done in the past, or the medications previously administered, to treat the presenting problem in the notations of the visit.  This will allow coders to apply the necessary CPT category II code to be measured so the provider can receive credit.  It is critical that all providers participating in MIPS programs be aware of the measures they are submitting to the program, so they know what to include in their documentation. Learn more about the transition from fee-for-service to value-based reimbursement.

In addition to recording things like lesion sizes and past medical history, documentation also needs to contain details such as the exact location of a procedure.  For example, if the procedure is done on the left or right hand, and which finger of the hand.  A coder may not be able to properly assign a modifier, CPT, or ICD-10 diagnosis code without this information.  Many healthcare providers use templates in their EHR systems to ensure they have captured all the information necessary to code accurately.  Discover what an EHR system should include for your specialty.

Accurate coding, which includes the use of modifiers, is the driver of medical reimbursement.  Inaccurate coding leads to denied claims and payment delays.

Interested in how RevenueXL can improve your coding and create a streamlined revenue cycle?  Contact us today.

What is Fee for Service?

Choose the Best Medical Billing Clearinghouse for your Healthcare Practice

7 Most Important Tips to Boost Your Revenue Cycle in 2016