You can’t stop with the stethoscope. Physicians now need to embrace all kinds of technologies to improve 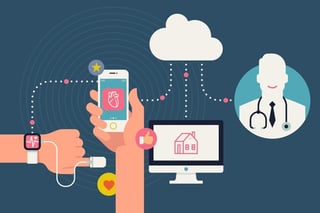 care – and give patients what they want.

Patients, in fact, are all about the use of advanced technology to improve their health these days. More than half of consumers are interested in buying wearable technologies such as fitness monitors for tracking physical activity and managing their personal health, according to the Accenture Digital Consumer Tech Survey 2014.


"In the past year wearable technologies have emerged as the next big consumer electronics market category, particularly for health and wellness," said Mattias Lewren, global managing director of Accenture’s Electronics and High-Tech industry group, in a news release.

What do your customers want?

As such, these consumers most likely will want their doctors to use the latest and greatest as well. What’s disconcerting, however, is that physicians are not quite as ready to embrace such technologies. Consider the following:

A survey published in the Journal of Medical Internet Research in September revealed that consumers really want physicians to move forward and adopt a variety of emerging technologies – while the doctors, themselves, expressed some reluctance. Even though this information is hardly earth-shattering, physicians need to pay attention to the specific technologies their patients are interested in so they can incorporate them into their practice to offer better care in the future.

The survey, which was conducted by Scripps Research Institute and authored by Dr. Eric Topol (a renowned digital medicine researcher), indicated that nearly 40 percent of the consumers questioned supported using new technologies for a non-life threatening medical diagnosis, compared with only 14 percent of providers.

In addition, the study found that:

If physicians opened up their technology hearts, however, they would discover all kinds of possibilities. There is a plethora of new electronic health record (EHR), smartphone and wearable technologies available for healthcare, including applications for remote monitoring and telemedicine, that can offer innovative ways for clinicians to stay connected to their patients and provide more timely and effective care.

For example, if a diabetic patient is sending their glucose levels to their physician on a daily or weekly basis via one of these technologies, the physician can make adjustments to the patient’s medication as needed, rather than waiting for their next visit.

And, the possibilities will continue to grow, as more innovations hit the healthcare market. According to a Healthcare Technology Vision 2015, a report from Accenture, patients soon might be able to:

In addition to leveraging emerging technology, patients want their doctors to share information in their EHRs – as 92 percent of consumers said that it would lead to better management of their health. But doctors are reluctant on this front. The survey also revealed that 90 percent of physicians were concerned that patients would experience anxiety after accessing their electronic health records and 82 percent felt that it would lead to requests for unnecessary medical evaluations. Unsurprisingly, only 34 percent and 25 percent of consumers felt the same concerns, according to the survey.

Giving patients access to their EHRs also can offer physicians another method of communication with their patients. And as Medicare and other payers are moving toward reimbursements based on value rather than individual services, such access may be able to improve patient outcomes without face-to-face interaction between a physician and a patient.

Technologies such as patient portals could enable sharing of such data, which could lead to a more open line of communication between patients and providers—as well as improved care and outcomes.

So no matter what type of technology consumers want to use, whether it’s wearables, smartphones, portals or “phablets” – the new category of devices that are between the size of a smartphone and a tablet – there will always be ways for physicians to incorporate them into their practice. To find out how RevenueXL’s certified EMR and EHR systems can help your practice better serve your patients’ technology demands and improve care in the future, contact us today.